[EN] MY GOODBYE TO DOWNTON ABBEY

[EN] MY GOODBYE TO DOWNTON ABBEY 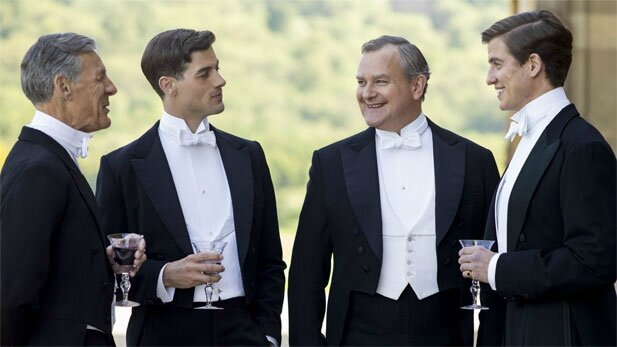 Downton Abbey said goodbye to the French viewers on the second day of 2016 with its last Christmas special. The episode gave a nice and happy ending for everyone… well, almost everyone when you think of Carson, I would rather say he was left with a “semi happy” ending.

I will keep sweet memories of this fine series. It presented a perfect reconstruction of the British gentry and servantship at the beginning of the twentieth century, with sophisticated and kind characters. I would mention Lord Grantham as an example: the man showed loyalty to the people who served him (e.g., Carson, Mrs. Padmore, Bates…), had never been mean or rude to anyone. He was a true gentleman. Downton Abbey created an environment in which love was mingled with tragedies (who could forget Matthew’s and Sybil’s death the day they welcomed their newborn?), changes that came alongside historical events and the acceptation of these changes (Tom Branson, the driver who married the Lord’s third daughter, etc.), humour (Denker vs. Spratt, the dowager countess’s lovely quotes…).

Love was at the core of Downton Abbey. In a sense, it has always been a matter of love: Mary/Matthew and eventually Mary/Henry, Edith/Michael, Edith/Bertie, Tom/Sybil, Isobel/Lord Merton, Anna/John Bates, plus the relationships that were not successful, and so on.

I must admit I was bored by some of these love stories and some characters’ evolution. The most disappointing, to me, was Mary. She was like a spoiled child raised in a rich family. Aiming at marrying a wealthy man even if she accepted Henry in the end, her joy to see him turning into a car salesman even seemed a bit odd (it was a bit difficult for me to trust her sincerity). Harsh to her sister Edith, appearing with a new haircut when Edith learns about Michael’s death, and nearly showing exasperation, like “come on, you should have known there was no hope, so why don’t you move on?” (it is true we doubted Michael would come back alive, but seriously, Mary…).

Yet curiously very close to her maid and the butler, in general, benevolent with the lower class. After Matthew passed away (could not bear the everlasting waltz between these folks), I expected Mary to take new challenging directions. What did we get? New pretenders for the Lady, again and again. It seemed that the sole objective for this character was to push her tie the knot, and be cruel to Edith to the end. See the Marigold revelation and Mary claiming she was unaware Edith did not tell Bertie… To me, Mary was certainly the less interesting character. I do not know if the Mary character was supposed to be the one that people would not appreciate or have mixed feelings about, but if it is, the job is well done. On the contrary, unlucky (for a long time) Edith was one of the most outstanding. When ‘Downton Abbey’ started, she was not really the most appealing hero in terms of temper, but she proved over the years to be mature, modern, and brave. She had several love interests as well, but they brought more compelling hardships/adventures to go through: she was left at the altar, had a baby out of wedlock (remember that was unacceptable back then!), headed a magazine. Edith became stronger. She totally and hopefully deserved a happy ending.

I regret the relationship between the Bates and justice (was it necessary to have both John and Anna accused of murder two seasons in a row?). I regret the fact that lots of servants arcs existed because they were linked to the Crawleys stories. For instance: we see servant Y doing things in city W because he/she is travelling with Crawley family member Z who had business to do in city W. However, that was a great idea to show the servants had their own dreams: Mrs. Padmore and her B&B, Daisy passing exams, Spratt and his column in Edith’s magazine, Molesley being a teacher… Times were changing, and people, too. I regret also that Downton Abbey did not go deeper for some story arcs, going from a curious beginning to a quick and simple development and conclusion, while wasting time on déjà-vu stories, let’s give the example of the Bates involved in criminal investigations.

These are some elements I wanted to point out, among others. Downton Abbey was a good series, it did not tell anything extraordinary, but (almost) ordinary people’s ordinary lives in a world in transition, in a soft and charming way. Even though I wish I could spend more great moments watching it, like intricate Tom Barrow said, “Even good things come to an end”.

You can check out my reviews in French here.